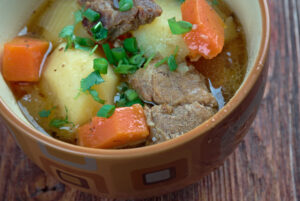 The UK has added a breed of Welsh lamb and watercress to its new protected food category scheme, set up to protect regional British foods after the UK departed a similar European scheme post-Brexit.

Other famous British products such as Melton Mowbray pork pies, Cornish pasties and wensleydale cheese were protected from imitation under the EU scheme, which offered global recognition.

The UK chose to depart the scheme post-Brexit and create its own independent geographic indication scheme, which is not recognised in the EU.

On Monday, Boris Johnson announced that Cambrian Mountains lamb and watercress had been added to the Geographical Indications (GI) scheme.

Since its launch, 91 British products have been added to the independent GI scheme: 81 agricultural products, five wines and five spirits.

Watercress has been added because of its production methods, associated with steadily flowing water, which Defra said deserved special status because it has remained unaltered by selection and breeding – meaning that its unique flavour has remained largely unchanged for generations.

The protected status means only specific plants grown in flowing water can bear the name watercress when commercially sold in Great Britain.

However, the peppery salad leaf is also grown in other countries, including the US and Spain, raising questions about the robustness of any protection that the new categorisation offers.

Welsh Cambrian Mountains lamb is reared at a naturally slow pace, grazing hills and mountains during the summer and autumn and using a traditional hafod a hendre system of farming, which dates back to the middle ages.

Johnson said the scheme should incentivise customers to buy British products – though the status does not have international recognition. “Our British farmers and food producers are among the very best in the world and I want people, both at home and abroad, to be lining up to buy British,” he said.

Fears over the future of free debt advice

There is growing concern that free, face-to-face advice which...
Read more

Disclaimer: speakconservative.com it's managers and its employees (collectively "The Company") do not make any guarantee or warranty about what is advertised or above. Information provided by this website is for research purposes only and should not be considered as personalized financial or health advice.
Copyright © 2021 Speak Conservative. All Rights Reserved

How is generator sets industry evolving to meet the global power demand?